Also there are allocations for IARU Emergency Operations, to be used as a centre frequency for traffic in Region 3. This region covers Australia, New Zealand, Asia, China and the Indian sub-continent. These would be typically activated in major disasters such as floods and tsunamis.

WICEN  is able to use 2  frequencies around 5MHz, allocated nationally by ACMA, and some frequencies on commercial segments allocated to the NSW Volunteer Rescue Association  (since WICEN (NSW)  is a specialist squad of the VRA.)

WICEN (NSW) also holds a number of repeater licences and associated frequencies, for both fixed and portable locations. WICEN (NR) has a 2m/70cm trailer-based portable repeater.  We do not presently have a fixed repeater.

REPEATERS – PORTABLE  (NR and STATE only)

Only commercial transceivers may be used. Amateur callsigns are not to be used on these frequencies, I/D as ‘WICEN  + location’.

Photo below: Setting up the WICEN (NR) portable repeater, near Byron Bay. 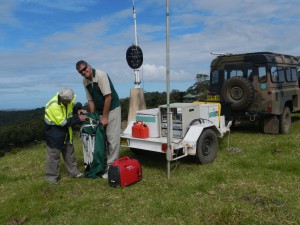