A radio contest is an on-air event where participating stations score points for contacts made, usually with bonus points for specific details like distance, location, band or mode.  Its certainly not everyone’s cup of tea, but a number of SARC members have been active in recent years, either individually or as a group using the VK2SRC callsign.

Notable in group efforts is club participation in the annual (Australian) John Moyle Field Day.   SARC has ‘stood on the podium’ as a multi-operator station in different categories from to 2003 to 2012, and 2017 to 2021, with 5 first places, being awarded the WIA Presidents Cup three times. (Now called the ‘Presidents Plaque’, after the actual cup mysteriouly disappeared). We are proud to have done the improbable by beating much larger capital city clubs. Unfortunately we did not participate as a group in 2013-14 due to theft of vital equipment. 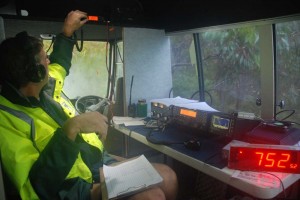 Photo above:  Ross VK2ARD at the HF desk in the SARC bus, John Moyle Field Day 2011

SARC has also participated in the VHF/UHF field days with good results from the club station and from individual members.

The Oceania DX contest has been around since the mid 1930s and was known previously as the VK/ZL Contest.
Activity has increased in recent years due to a huge promotional effort by the joint Australian and New Zealand Contest Committee. SARC participated in 2013. This contest offers a great opportunity to make rare contacts around the Asia/Pacific region. Full details of this are at the contest website www.oceaniadxcontest.com

Not a contest, but a world-wide event promoting lighthouses and raising awareness of their history. SARC has participated many times, activating lighthouses at Byron Bay, Ballina, Yamba and Fingal Head, and the Evans Head light.